Welcome to our blog

Determination, hard work and some help turned a hairstylist into an entrepreneur

He could well be the richest barber in the country. But G Ramesh Babu charges only Rs.75 for a haircut. He has his salon at the famous Bowring Institute on St. Mark’s Road in Bangalore, one of the oldest clubs in the city.

The 42-year-old hairstylist attends to around eight customers a day, working in two shifts of 2-3 hours each, morning and evening. But what he does in between the two shifts is the stuff fairy tales are made of.

The man who wields the scissors at Bowring sits at a different office during rest of the day as CEO of a large car rental company that owns a fleet of luxury cars, including a dazzling Rs.3.3 crore Rolls Royce, and a range of Mercs, BMWs, Volkswagens, and Innovas.

His company, Ramesh Tours and Travels Private Limited, owns a total of 127 cars and has on its rolls around 120 employees. Most of them are drivers who draw a monthly pay of not less than Rs.14000, with additional overtime incentives.

“We are one of the top companies in the country in this field,” says Ramesh, who lost his father when he was just 7 years old, and later braved poverty and hunger to reach this position.

His rise to success is marked by hard work, a burning desire to succeed, and the favour shown by a few good-hearted men and women.

(Learn more about the success mantras of Champions. Sarath Kumar, top international motorcycle racer, and the first Indian to secure a podium finish at an international motorsports event, was a child laborer once. To Read his story Click Here)

He says, “We had a hair salon at Brigadier Road. The shop was called ‘Modern Hair Dressers’ and it was started in 1928 by my grandfather. My father was running the shop till his death. I was 7 then and I had two other younger siblings.

“The responsibility of bringing us up fell on my mother, who started working as a housemaid to support the family. For many years, we survived on one meal a day. I became so used to it that even today I don’t have my breakfast.”

In spite of the situation at home, Ramesh studied well and was among the top three rankers in class. He was a sportsman too. He played football in school and represented Karnataka in the junior nationals in 1500 metres athletic event.

At 13, he took up a part-time job as a newspaper delivery boy and earned Rs.60 per month. His mother took up small tailoring jobs and made some extra money. But that hardly changed the situation for the family.

He recalls an incident that happened when he was in class five. At that time, the family’s hair salon was being run by his uncle – father’s brother – who used to pay them about Rs.5 daily as their share of the income.

“I was in class 5 and we were instructed to use fountain pens for the first time at school. Until then we were using pencils for writing. I went to our shop and told the person working there – an employee who had been appointed by my father – that I needed a pen.

He gave Rs.3.50 and I bought a Pilot pen with the money. In the evening, when I went to the shop my uncle was furious. He snatched the pen from me and said I don’t need such expensive pens and gave me a cheaper pen instead. That incident fuelled my ambition to succeed in life,” says Ramesh, who has the fortune of putting his own children in top schools.

He has two daughters and a son. The eldest daughter is studying in class ten at a well-known residential school in Kothagiri and he spends around Rs.1.5 lakh on her education per annum.

An important decision he took early in life was to learn the barbering skills of his father. He took charge of the family’s hair salon in 1990 and renamed it ‘Inner Space’. He became a hit with youngsters who started making a beeline to his shop and there were days when he had worked up to 3 am to cater to waiting customers.

Though he was not able to complete his PUC (Pre University Course), he managed to obtain a diploma in electronics later.

For couple of years, he worked as a marketing executive for a private company. But the turning point in his life came after he purchased a Maruti Omni in 1995 on a  loan. Based on the advice of a well-wisher, he decided to rent out his car.

His first client was Intel, which had a small office in Bangalore then. His business grew as Intel expanded its operations.

“Intel had just four employees when we started working with them. But they grew fast. We looked after their transport needs till 2000 by which time they had around 250 employees and 25 of our cars were on duty for them,” he recalls.

Meanwhile, Ramesh’s client list continued to grow. He entered the luxury car segment in 2004 when he bought his first Mercedes Benz. He now owns a fleet of 68 luxury cars. Bollywood actors, celebrities, and top industrialists travel in his cars when they are in Bangalore.

In 1997, he had opened a hair salon at Bowring Institute. Though he has closed the other shop due to lack of parking space and other issues that cropped up with Bangalore’s exponential growth in the last couple of decades, Ramesh has no such plans for the one at Bowring.

Ask him why he needs to continue cutting hair, and he shoots back, “Why not? How can I forget the job that has made me what I am?”

Nor has he forgotten those who helped him in his hard days. He makes special mention of two people: Ms. Nandini Ashok and Mr. Philip Louise.

Take a bow, Nandini and Philip. You have helped a worthy man! 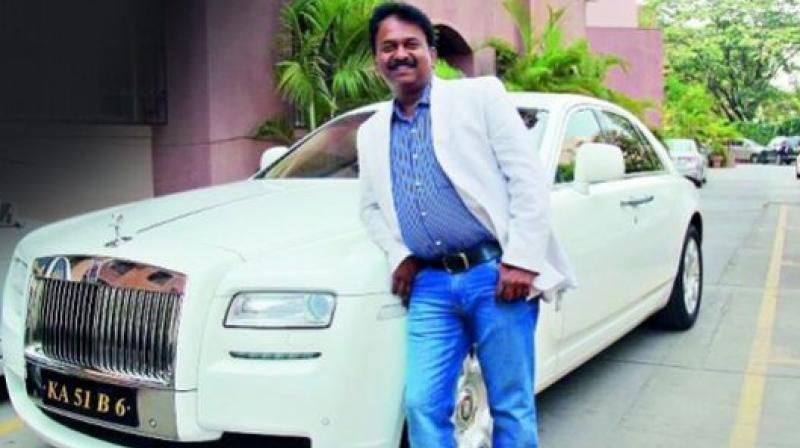 Mysuru: His is a B to B story or to be more precise a Barber to a Billionaire story.  Starting out as a humble barber, Mr Ramesh Babu , 45,  today is a proud  owner of  378 ordinary cars and 120 top-end luxury cars , including the Rolls Royce Ghost which he hires out to corporate giants, and filmstars like Amitabh Bachchan and Aamir Khan when they come to Bengaluru on visits.

The entrepreneur, who now runs Ramesh Tours and Travels in Bengaluru , is still in touch with his roots,  making sure he cuts hair three days a week at his salon at the Bowring Institute in the city.  “It keeps me humble,” he told the audience at a symposium held as part of the three day “Mysuru travel mart,”  here on Friday.

His father Gopal, who ran a barber’s shop on Brigade road, died when he was seven years old and his uncle took over the business, but  gave the family only Rs 5 a day, forcing his  mother had to work as domestic help.

He took a job while in class VIII delivering papers and milk to houses on a cycle gifted to his mother by the daughter of the house she worked in, Ms Nandini.  But he doggedly did his SSLC and worked as an office boy while doing his PUC in commerce at a night college.

Then one day he confronted his uncle  and asked him to hand over the salon, which he did.  Soon he decided to give up his studies and gave all his attention to the salon. While to begin with he only watched his hired barber cut hair,  one day he was forced to do it himself when a customer arrived early. That was the beginning.

His travel business began quite by chance in 1994 when he bought his first Maruti car on a loan and found it hard to pay it off.

Ms Nandini again stepped in and helped him hire it out for people travelling outside the city. “In 2001, I was asked to send a Mercedes for someone  in Bengaluru. I borrowed it  but it stalled halfway.  So I decided to buy one in 2004. Now I have 378 cars including 120 luxury ones. People want luxury, they are ready to pay for it,”   added the entrepreneur, who hopes to own 700 cars in a decade.

“Even when I had to clear a road tax of Rs 3.78 crores I sold my  wife’s jewellery and other  properties but not  the cars. I still have my Maruthi van,” he smiled.